June 13, 2017
Today we received the Decision from the Dispute Tribunal Hearing between me and the marriage  celebrant, and as expected we were successful.  Every single person who was involved, looked over the case, read the complaint and adjudicated at the hearing, agreed with us. Everyone except Tony's family. But this is because their disagreement was never about events at the wedding, but a series of imagined issues. 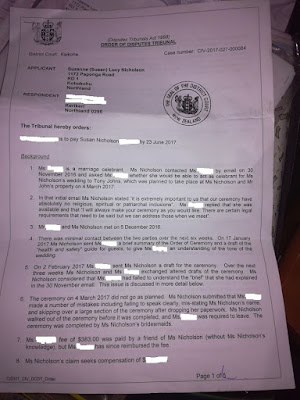 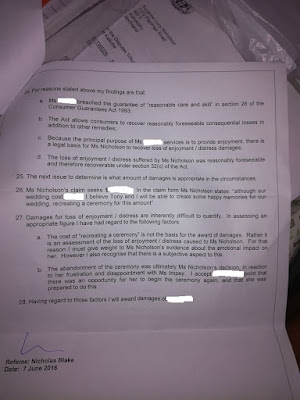 It is however a hollow victory. Attaining it exposed the vindictive backstabbing that certain members of so-called-family engaged in.  For a brief moment, I did doubt the actual intent of the action, but the perniciousness of the fall-out removed that doubt.  The bitter-twisted hatred built on cognitive fictions is astounding. The accusations that I am harassing, incredible as the toxic waste is thrown.  I certainly hope they find a lawyer greedy enough to take on the case against me that they threaten.

Popular posts from this blog

I didn't ask for an extention

February 20, 2021
Double-speak in academia is certainly a thing and my latest experience is not my first.  Some institutions are worse than others and I returned to the one in this story and it hadn't changed in 10 years.   Hi Lecturer, Thinking ahead to assignment two, the Submission, and the discussion we had around it during the contact course. You mentioned that you will be speaking more about this and the issues the coming election will have on the processes of the House with submission dates etc. My concern is with the time frames, as I need to fit my study around my current obligations, and ideally I would start my research and preparation as soon as I have finished assignment one.  Looking at the current Bills on the NZ Parliament site, there are few accepting submissions and they are closing soon and well before due date, (because the expectation was we were to submit after the academic assignment was marked). A topic of interest to me and social policy is https://www.parliament.nz/en/pb/bi
Read more

In Search of Equilibrium

February 09, 2021
In Search of Equilibrium   As the current Labour government rushes through legislation under urgency to remove the provision of binding referenda in setting up Maori Local council wards, the narrative is, as usual, unsurprising. The 2002 legislation allowed "a tiny minority of voters, just 5%, to force a public referendum and veto council's decision".  Of course omitting that the referendum requires a majority vote to be successful.   Simon Bridges MP for Tauranga, proud of his Maori heritage said it was insulting 'to suggest he, and other Maori needed special treatment' to gain seats of representation.   Willie Jackson admonished Bridges for not being Maori enough in his campaign to win the Tauranga seat.   Maori Party co-leader Debbie Ngarewa-Packer has simply labelled anyone who dares oppose race-based representation as a racist.   ( Stuff ) To live in a society with total freedom would be to live with anarchy and the probable disorder of a lawless
Read more

The Incredible Pettiness of Bureaucracy.

February 18, 2021
The Incredible Pettiness of Bureaucracy: the scrabble to arse cover.  I lodged a formal complaint with (redacted) on the morning of 11 February 2021. I am today completing my application to withdraw from the GradDip ECE program. I cannot see how this can be resolved in any way that I will be comfortable and safe, studying with (redacted), handing in assignments to be marked by collaborating staff who are ultimately deciding my future, to which so far, they have shown so very little care. I believe, as I am being forced to withdraw\ due to the circumstances (redacted) have created, the withdrawal fee of $309.00 should be waived and I would like to have a discussion in regards to having my expenditure so far towards the course compensated. Although I made contact with (redacted) on the morning of 11 February 2021 in regards to lodging this complaint against (redacted) and (redacted), I was contacted by (redacted). at 1730 also on 11 February 2021.  Kia ora Susan, Thanks for your email
Read more