April 04, 2017
A place I hang out at has a small car park. There are some gates with 'No Parking' signs on them. The gates have a 'Keep Clear Emergency Access' sign on them too. The gates, as a very valid health and safety regulation, need to be kept clear of parked cars and the onus of keeping those gates clear falls on a small bunch of volunteers as does the responsibility under the H&S Act.

Astoundingly, people who park here get upset when they are politely asked to move their vehicle. A couple of roading companies donated road cones so the volunteers could dodge the displeasure of the errant parkers.

Despite this choice architecture, to my absolute confoundation... Yep!
(the car on the left is correctly parked) 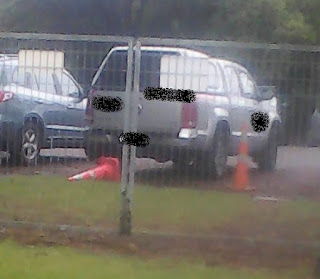 This reminds me of, many years ago now, when I played at being a 'door tech'. Two of us working on a job, the double swing doors of a commercial building. You probably didn't know but swing doors have a hydraulic spring, usually in the floor, to stop them flapping about in the wind, and as this was Wellington one of these doors was, as the floor-spring had failed.

We removed the door and had erected the required safety cones and barriers and erected the (trip hazard) safety signs, but of course it was a main access way so people had to be able to come and go through the other door.

To my astonishment many people stepped inside our cones and barriers and over us working on the floor to avoid having to open and walk through the perfectly fine working door, that they had to open and enter and exit every other time. The only way we could stop people walking through our work site was to wedge the other door open. This one is simply a 'path of least resistance problem, so creating an even easier path was the solution.

Helen Kelly, (1964-2016) who was President of the New Zealand Council of Trade Unions, campaigned for better workplace health and safety conditions, in an interview on RNZ said, "You can't change people - you have to change systems". Very wise words, hence the cones.

But what do you do with people who know the rules but don't follow them because they either think it doesn't/shouldn't apply to them or it's just not convenient, thanks.

Mr Google, once you get past the hyperbolic labels of psychopathy, puts it down to a narcissistic personality disorder. "Do not expect them to take ordinary responsibility", to ask them to change what they are doing, or to follow the rules is taken as personal criticism". They have "difficulty in admitting mistakes and a tendency to blame others, quick to anger an do not expect them to apologize or make amends or show any consideration for your feelings".

Cheers Mr Google. But what do you do with people who know the rules but don't follow them because they either think it doesn't/shouldn't apply to them or it's just not convenient.

And how do you deal with the fall out from these people when for the good of the group rules must be enforced?

Popular posts from this blog

I didn't ask for an extention

February 20, 2021
Double-speak in academia is certainly a thing and my latest experience is not my first.  Some institutions are worse than others and I returned to the one in this story and it hadn't changed in 10 years.   Hi Lecturer, Thinking ahead to assignment two, the Submission, and the discussion we had around it during the contact course. You mentioned that you will be speaking more about this and the issues the coming election will have on the processes of the House with submission dates etc. My concern is with the time frames, as I need to fit my study around my current obligations, and ideally I would start my research and preparation as soon as I have finished assignment one.  Looking at the current Bills on the NZ Parliament site, there are few accepting submissions and they are closing soon and well before due date, (because the expectation was we were to submit after the academic assignment was marked). A topic of interest to me and social policy is https://www.parliament.nz/en/pb/bi
Read more

In Search of Equilibrium

February 09, 2021
In Search of Equilibrium   As the current Labour government rushes through legislation under urgency to remove the provision of binding referenda in setting up Maori Local council wards, the narrative is, as usual, unsurprising. The 2002 legislation allowed "a tiny minority of voters, just 5%, to force a public referendum and veto council's decision".  Of course omitting that the referendum requires a majority vote to be successful.   Simon Bridges MP for Tauranga, proud of his Maori heritage said it was insulting 'to suggest he, and other Maori needed special treatment' to gain seats of representation.   Willie Jackson admonished Bridges for not being Maori enough in his campaign to win the Tauranga seat.   Maori Party co-leader Debbie Ngarewa-Packer has simply labelled anyone who dares oppose race-based representation as a racist.   ( Stuff ) To live in a society with total freedom would be to live with anarchy and the probable disorder of a lawless
Read more

The Incredible Pettiness of Bureaucracy.

February 18, 2021
The Incredible Pettiness of Bureaucracy: the scrabble to arse cover.  I lodged a formal complaint with (redacted) on the morning of 11 February 2021. I am today completing my application to withdraw from the GradDip ECE program. I cannot see how this can be resolved in any way that I will be comfortable and safe, studying with (redacted), handing in assignments to be marked by collaborating staff who are ultimately deciding my future, to which so far, they have shown so very little care. I believe, as I am being forced to withdraw\ due to the circumstances (redacted) have created, the withdrawal fee of $309.00 should be waived and I would like to have a discussion in regards to having my expenditure so far towards the course compensated. Although I made contact with (redacted) on the morning of 11 February 2021 in regards to lodging this complaint against (redacted) and (redacted), I was contacted by (redacted). at 1730 also on 11 February 2021.  Kia ora Susan, Thanks for your email
Read more